Design analysis of ORC micro-turbines making use of thermal energy

POLISH MARITIME RESEARCH 2(78) 2013 Vol 20; pp. 48-60 10.2478/pomr-2013-0016 Design analysis of ORC micro-turbines making use of thermal energy of oceans Marian Piwowarski, Ph.D. Gdansk University of Technology, Poland ABSTRACT The article presents the results of the analysis of energy conversion cycles making use of thermal energy of oceans. The objects of analysis were two cases of closed Organic Rankine Cycle (ORC) power plants, which were: the cycle in which the vapour of the working medium was produced by warm oceanic water in the circum-equatorial zone, and the so-called “arctic” cycle in which this vapour was produced by non-frozen water in the circumpolar zone. Between ten and twenty low-boiling media were examined for which operating parameters were optimised to obtain the highest cycle efficiency. A preliminary design of an ORC turbine which was obtained by optimising basic design parameters is included. It has been proved that realisation of the Ocean Thermal Energy Conversion (OTEC) cycle is possible both in the warm and permanently frozen regions. The results of the calculations have also revealed that the efficiency of the OTEC cycle is higher in the circumpolar zone. Selecting a low-boiling medium and designing a highly efficient turbine operating in both abovementioned regimes is technically realisable. Key words: Ocean Thermal Energy Conversion (OTEC) cycles; Organic Rankine Cycle (ORC); low-boiling media; steam turbines; turbine design INTRODUCTION Seas and oceans are the world largest reservoirs in which thermal energy of sunbeams is accumulated. The sunlight falling on the ocean surface is intensively absorbed by the water which collects all its energy in the shallow surface layer. Unlike the solar energy, the intensity and concentration of which is subject to steady cycles and accidental disturbances, the energy of seas and oceans reveals stable intensity, both in 24 hr and annual time scale. This is an important advantage as it leaves aside the problem of energy storage and its costs. In tropical regions of oceans, approximately between 15° north and 15° south latitude, the heat collected from sunbeams heats the water in the shallow surface layer to the practically constant temperature nearing 28 °C. The annual average temperature in the entire region ranges approximately between 27 °C and 29 °C. Below the warm surface layer the water becomes colder, and at the depth between 800 and 1000 m the water temperature drops down to about 4 °C. Depending on the region, temperature changes can take different courses and for instance, at the depth of 200 m the water temperature can be already as low as 7 °C. The temperature difference is kept constant all year round, with small deviations of a few Celsius degrees resulting from seasonal weather and day/night changes. Utilisation of this difference bases on the application of a working medium which evaporates at the surface temperature and condensates when cooled by the water taken from the much deeper level. This type of energy conversion is frequently referred to as Ocean Thermal Energy Conversion (OTEC). A key issue in case of localisation of a number of OTEC units close to each other is the distance between them. Due to outlet water disposal, this distance should not be excessively small. This aspect is of high importance as the surface waters are cooled each time the outlet water is disposed from an open OTEC installation. In the system of combined units the excessive amount of water disposed by the system can considerably decrease the temperature of the surrounding regions, which in turn can affect the efficiency of all power plants situated nearby. Initial concepts on how to make use of the energy collected in seas were presented by J. d’Arsonval (France) in 1881. The first experimental object of this type was built by his pupil, G. Claude, in Matanzas near Cuba in 1928. The power output of the installation was 22 kW and it worked only for 2 weeks, after which was partially destroyed by typhoons. In late fifties of the last century French researchers began again to study the subject, building an installation in the Ivory Coast region. Further development in this field was initiated in 1960 by Andersens, two Americans, father and son, who established a private company exploring thermal energy from seas using OTEC technology. A few years later a 50 kW semi-technical system was built in the USA, which was followed by a fully technical one of 1 MW power output, built in 1980 and installed on a reconstructed ship. Cold water amounting to 450 tonnes was delivered using polyethylene pipes having the diameter of 1.5 m and length of 700 m. In 1981, on Nauru island in Japan a stationary 100 kW installation was built, to which 1410 t/h 48 POLISH MARITIME RESEARCH, No 2/2013 Unauthenticated Download Date | 1/11/15 7:38 PM 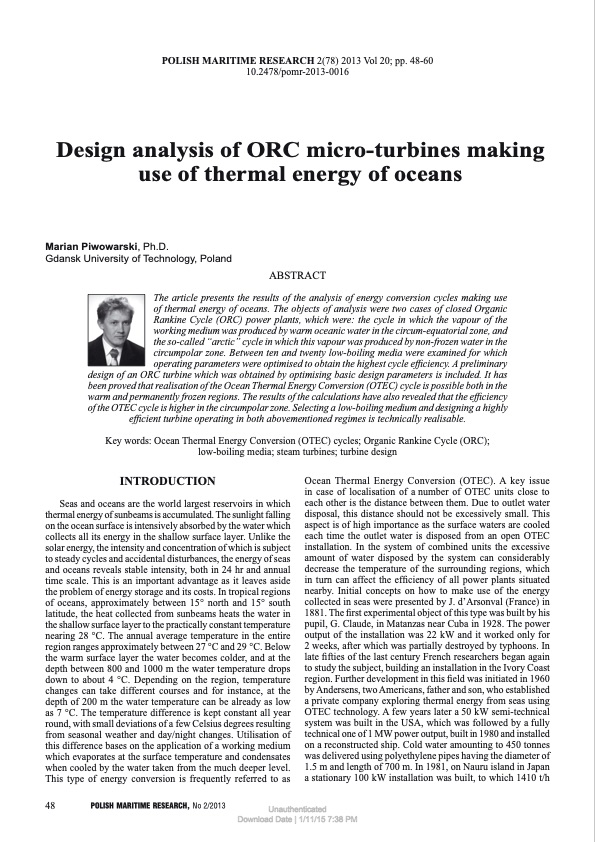 Design analysis of ORC micro-turbines making use of thermal energy