RT&V at Basin Electric Project Objective: The goal of this project is prove out the technical and economic feasibility to capture thermal energy from a 30 MW (39,000 hp) gas turbine driving a natural gas pipeline compressor with an Organic Rankine Cycle (ORC) machine producing 4 MW of emission-free (no fuel and virtually no emissions) electricity in the summer and 6 MW in the winter. There are actually four sites that will employ ORC technology. The site selected for the data acquisition and assessment will be Compressor station number seven, see site description, which supports an electric coop that requires power and voltage support for grid which includes an Indian Nation with an important hospital load. Typically, each of the natural gas pipeline compressor stations in this system consists of a Roll Royce RB-211 gas turbine driving a natural gas compressor, which compresses the natural gas at periodic intervals along the pipeline. The exhaust temperature of the gas turbine is roughly 900 degrees Fahrenheit. The cogeneration system that will be installed is a thermodynamic Rankine Cycle, but uses a non-freezing, ozone-benign organic working fluid working fluid, pentane. Because of the substitution of an organic working fluid for water, this process is known as the ORC. This project integrates the ORC generator assembly into an ownership structure involving a partnership between the utility, a developer, Ormat and the pipeline. The pipeline owner sells the resource (waste heat) to the developer. The developer uses that resource to produce electricity with the developer’s technology and delivers the power to the utility. The utility then integrates that resource into the grid, firming the power supply and interconnecting the project to the consumers. The resulting overall system uses natural gas as a fuel to cogenerate mechanical power (for the compressor) and electrical power (for the grid). The heat in the exhaust is used to heat an intermediate fluid, which is then used to heat the ORC working fluid in a secondary heat exchanger. The ORC rejects heat at a lower temperature in an ambient air-cooled condenser. This process requires a small amount of auxiliary electricity to operate the ORC system (fans and pumps), but produces more than six times the amount consumed. Site Description: Northern Border Pipeline owns a 1,249-mile United States interstate pipeline system that transports natural gas from the Montana-Saskatchewan border near Port of Morgan, Montana, to interconnecting pipelines in the upper Midwest of the United States. The Northern Border pipeline system connects with multiple pipelines, which provides shippers with access to the various natural gas markets served by those pipelines. In the year ended December 31, 2001, we estimate that Northern Border Pipeline transported approximately 20% of the total amount of natural gas imported from Canada to the United States. Over the same period, approximately 90% of the natural gas Northern Border Pipeline transported was produced in the western Canadian sedimentary basin located in the provinces of Alberta, British Columbia and Saskatchewan. The Northern Border pipeline system was initially constructed in 1982 and was expanded and/or extended in 1991, 1992 and 1998. The Chicago Project was completed in 1998, and increased the pipeline system's ability to receive natural gas by 42% to its current capacity of 2.4 billion cubic feet per day. On October 1, 2001, Northern Border Pipeline announced it had completed construction of Project 2000, the 35-mile extension and expansion of its pipeline system into GAS TECHNOLOGY INSTITUTE 1700 South Mount Prospect Road Des Plaines, Illinois 60018 www.gastechnology.org 1 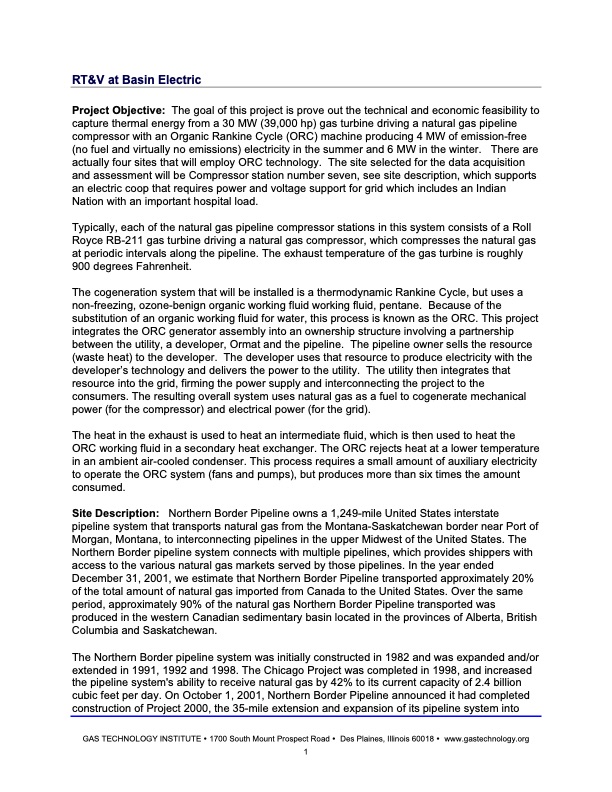