Mehta et al., International Journal of Advanced Engineering Technology E-ISSN 0976-3945 The overall rate of heat transfer equation on a differential base for the surface area dA is dq=q"dA=U(Th -Tc )localdA=U∆TdA Integrating the two above equations across the heat exchanger surface area, we get q = Ch (Th,i – Th,o) = Cc(Tc,o - Tc,i) q=UA Tm= Where, 3rd parameter is the actual mean temperature difference that depends upon the exchanger flow arrangement and degree of fluid mixing within each fluid stream. Figure show a rectangular strip through which heat transfer takes place of surface area A in positive x direction, following figure 1 shows the Nomenclature of Heat Exchanger analysis of heat exchanger. produces particles for stable nano fluids without surfactants or any electrostatic stabilizers, but has the disadvantage of oxidation of pure metals and low vapor pressure fluids. There are mainly four steps in the process of the direct evaporation - condensation method also known as one step method. 1. A cylinder containing a heat transferring fluid such as water or ethylene glycol is rotated inside so that a thin film of the fluid is constantly ejected out through the top of the chamber. 2. A piece of metallic material is evaporated by heating on a crucible as the source of the nano particles. 3. The fluid is allowed to cool at the bottom of the chamber to prevent any sort of unwanted evaporation. Another method for synthesis of nano fluid is the laser ablation method, which is used to produce alumina nano fluids [5]. Pure chemical synthesis is also an alternative method which has been used by Patel [6] to prepare gold and silver nanofluids. Zhu et al [7] also used one-step pure chemical synthesis method for preparing nanofluids using copper nano particles dispensed in ethylene glycol. There are basically four ways for the synthesis of nano fluids or important factors. They are basically, 1. Dispensing ability of nano particles 2. Stability factor of nano particles 3. Chemical compatibility associated to nano particles 4. Thermal stability of nano fluids 1.4.3 Type of nano fluid There are different types of nano fluid; basically Al2O3 + water CuO + water TiO + water CH3CH2OH + water Out of these we are going to use Al2O3 & water as our nano fluid in heat exchanger. 1.5.1 Thermal Conductivity of (Al2O3 + water) nano fluid The effect of base fluid on thermal conductivity is shown in Figure 2. The result in Figure 4 demonstrates that the thermal conductivity increment is least for the water-based nano fluids compared with that to of other nano fluids. This result is quite encouraging as heat transfer enhancement is often most required when poorer heat transfer fluids are involved. Figure 2 thus indicates that the thermal conductivity increment for the poorer heat transfer fluids compared to the fluids with better thermal conductivity such as water. Figure 2[28] Effect of temperature on thermal conductivity of Al2O3-based nanofluids Figure 1[27] 1.4 Regarding nano fluid 1.4.1 Heat conduction mechanisms in nano fluid Nano fluid is nothing but fluid particles which are less than even a micron(nearly 10-9 times smaller) in diameter and highly reactive and efficient material which can be used to increase factor like rate of reaction, thermal conductivity of any metal or material, they are that much reactive and strong. Keblinski [1] presented four possible methods in nano fluids which may contribute to thermal conduction. (a) Brownianmotionofnanoparticles. (b) Liquidlayeringattheliquid/particleinterface. (c) Ballistic nature of heat transport in nano particles. (d) Nanoparticleclusteringinnanofluids. The Brownian motion of nano particles is too slow to transfer heat through a nano fluid. This mechanism works well only when the particle clustering has both the positive and negative effects of thermal conductivity which is obtained indirectly through convection. 1.4.2 Preparation of nano fluid The preparation of nano fluid is the first important step in using nano phase particles to change the heat transfer rate of conventional fluids. Nano fluids are mainly made up of metals, oxides, carbides and carbon nano tubes that can easily be dispensed in heat transferring fluids, such as water, ethylene glycol, hydrocarbons and fluorocarbons by addition of stabilizing agents. Nano particles can also be produced from several processes namely gas condensation, mechanical attribution or chemical precipitation. These nanoparticles can also be produced under cleaner conditions and their surface can be protected from unexpected coatings which may occur during the gas condensation process. The main limitation of such method is that the all particles made by this method occur with some incapability to produce pure metallic nano powders. The formation of such a problem can be reduced by using a direct evaporation condensation method [2, 3, and 4]. This method helps in controlling particle size and IJAET/Vol.III/ Issue IV/Oct.-Dec., 2012/49-54 Nomenclature of Heat Exchanger 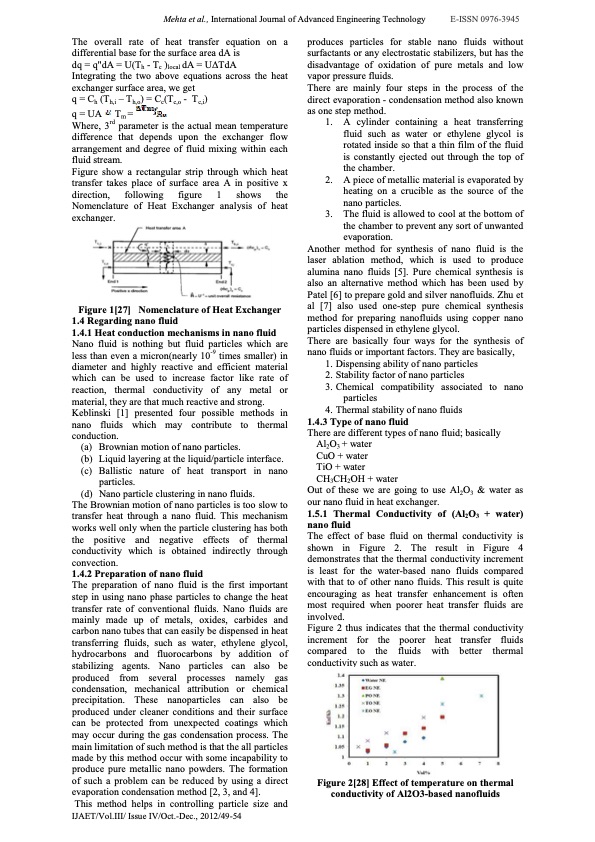 IT XR Project Redstone NFT Available for Sale: NFT for high tech turbine design with one part 3D printed counter-rotating energy turbine. Be part of the future with this NFT. Can be bought and sold but only one design NFT exists. Royalties go to the developer (Infinity) to keep enhancing design and applications... More Info

Infinity Turbine IT XR Project Redstone Design: NFT for sale... NFT for high tech turbine design with one part 3D printed counter-rotating energy turbine. Includes all rights to this turbine design, including license for Fluid Handling Block I and II for the turbine assembly and housing. The NFT includes the blueprints (cad/cam), revenue streams, and all future development of the IT XR Project Redstone... More Info

Infinity Turbine ROT Radial Outflow Turbine 24 Design and Worldwide Rights: NFT for sale... NFT for the ROT 24 energy turbine. Be part of the future with this NFT. This design can be bought and sold but only one design NFT exists. You may manufacture the unit, or get the revenues from its sale from Infinity Turbine. Royalties go to the developer (Infinity) to keep enhancing design and applications... More Info

Infinity Supercritical CO2 10 Liter Extractor Design and Worldwide Rights: The Infinity Supercritical 10L CO2 extractor is for botanical oil extraction, which is rich in terpenes and can produce shelf ready full spectrum oil. With over 5 years of development, this industry leader mature extractor machine has been sold since 2015 and is part of many profitable businesses. The process can also be used for electrowinning, e-waste recycling, and lithium battery recycling, gold mining electronic wastes, precious metals. CO2 can also be used in a reverse fuel cell with nafion to make a gas-to-liquids fuel, such as methanol, ethanol and butanol or ethylene. Supercritical CO2 has also been used for treating nafion to make it more effective catalyst. This NFT is for the purchase of worldwide rights which includes the design. More Info

Infinity Turbine Products: Special for this month, any plans are $10,000 for complete Cad/Cam blueprints. License is for one build. Try before you buy a production license. May pay by Bitcoin or other Crypto. Products Page... More Info