GEOTHERMAL ENERGY USE COMPARED TO OTHER RENEWABLES

GEOTHERMAL ENERGY USE COMPARED TO OTHER RENEWABLES John W. Lund, Geo-Heat Center Renewable energy, which includes production from geo- thermal, wind, solar, biomass, hydroelectric and wave/ ocean/tides, is gaining interest from politicians and devel- opers due to global warming predictions and the high cost of oil. Development is also stimulated by the establish- ment in many states of Renewable Portfolio Standards (RPS) that are to be implemented over the next 10 to 30 years. We in the geothermal industry tend to look only at our resource, but putting geothermal energy production in perspective with the other renewables, helps to understand their place in the market along with strengths and weak- nesses. Thus, this article is an attempt to compare the development of all renewable energy types. Data on re- newables are available for the world from the International Energy Agency (IEA), but, unfortunately the latest data are from 2004 with some estimates for 2005 (IEA, 2006). The following tables are based on data from the IEA pub- lication, supplemented by several other sources. World energy is described in terms of Total Primary En- ergy Supply (TPES), which is all energy consumed by end users, excluding electricity but including the energy con- sumed at electric utilities to generate electricity. (In esti- mating energy expenditures, there are no fuel-associated expenditures for hydroelectric power, geothermal energy, solar energy, or wind energy, and the quantifiable expendi- tures for process fuel and intermediate products are ex- cluded.) To put fossil fuels and nuclear in context with renew- ables, the world TPES was 11,059 Mtoe (million tonnes of oil equivalent; one Mtoe = 4.1868 x 104 TJ = 3.968 x 107 MBtu = 11,630 GWh), of which 13.1% or 1,448 Mtoe was produced from renewable energy sources in 2004. This is equivalent to 463.4 million TJ (128.7 million GWh) and 60.6 million TJ (16.8 million GWh) respectively. The various shares of energy are as follows: Table 1. 2004 Fuel shares in World Total Primary Energy Supply. Looking at renewables in more detail, we find that re- newable combustibles and wastes (including solid bio- mass/charcoal, liquid biomass, renewable municipal 10 waste, and gas from biomass – referred to as biomass in this paper) accounts for 79.4% of the total as shown in the following table. Table 2. 2004 product shares in world renewable energy supply. If we just consider electricity production, then the rela- tionship between renewables and other fuel types are shown in Table 3. Table 3. Fuel shares in world electricity production in 2004. Within the renewables share (17.9%), a majority, or 16.1%, is produced from hydro, 1.0% from biomass and 0.8% from geothermal, wind, solar and tide combined (one third of which is from geothermal). Unfortunately, capacity factors (number of equivalent full-load hours of operation per year for electricity genera- tion) and energy generated for each of the renewables, are only available from IEA and OECD (Organization for Economic Co-operation and Development) countries which include most of western Europe, Czech Republic, Hungary, Slovak Republic, Canada, United States, Austra- lia, New Zealand, Turkey, Japan, Korea, and Mexico. A summary of renewables for OECD countries is shown in Table 4. The majority, 80.5% of the generated energy (around 1,650,000 GWh/yr) came from hydro, followed by 12% from biomass, 5.4% from wind, 2.0% from geo- thermal, 0.12% from solar and 0.04% from tides. OECD countries supply only 21.8% of world renewables while consuming 49.8% of world TPES. However, when consid- ering new renewables, OECD countries account for most of the production of wind, solar and tide energy in 2004 (86.3%). GHC BULLETIN, JANUARY 2008

PDF Image | GEOTHERMAL ENERGY USE COMPARED TO OTHER RENEWABLES 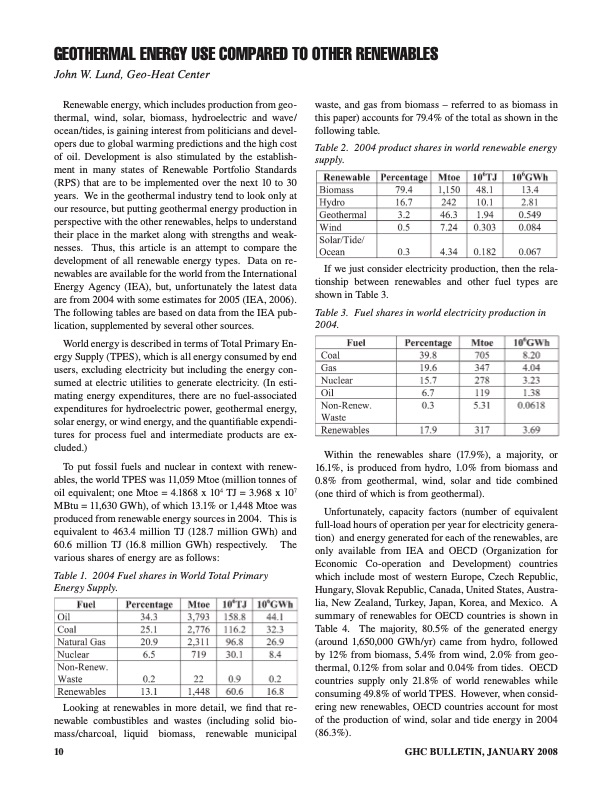 GEOTHERMAL ENERGY USE COMPARED TO OTHER RENEWABLES