Geothermal Prospecting for Nevis and Montserrat

Geothermal eNerGy ProPectiNG for the cariBBeaN islaNds of Nevis aNd moNtserrat Randy R. Koon Koon, Department of Physics, the University of the West Indies, St Augustine, Trinidad AbstrAct Geothermal energy exploration is vastly dependent on the findings of geophysical surveys and other exploratory methods that may yield sub-surface characteristics of potential reservoirs, such as rock morphology, fault lining, and fluid dynamics. The main focus of this paper is to capture and explore the geological and geophysical methods required to generate an enhanced understanding of southern Montserrat and western Nevis. In addition, the location of deep fracture networks that are necessary for fluid circulation in hydrothermal systems will be identified through seismic analysis. IntroductIon Physical manifestation of stresses within the Earth is represented by fractures, as well as faults. Once rock is compelled beyond its elastic limit (its ability to deform) fractures are generated. It should be noted that all stresses, be it localized or regional stress systems, can be assessed based on fault orientation. There exists a major fault system on the island of Montserrat known as the Belham Valley Fault (BVF). The BVF not only dominates southern Montserrat but also influences the pattern of volcanism and alignment of vents within the Soufriere Island morphology (Kenedi 2010). The Caribbean islands are situated on a crustal plate that moves eastward along the North and South American Plates, and subducting eastward beneath the Atlantic Plate, hence the reason for active volcanism (Huttrer, 1999). High temperature sources that are concentrated in regions of active or volcanic islands of the Eastern Caribbean chain are the most desirable area (Haraksingh & Koon Koon, 2011). Heat mining from the earth can theoretically supply the world at present energy demand for many millennia (Sanyal, 2010). The conclusion implicitly assumes that the world’s energy demand will not increase indefinitely in the future. From Figure 1 the assumption is justified, as it illustrates the projection of the world’s population and energy demand worldwide by various parties which indicates that both the population and energy demand worldwide would peak by about the year 2050, proceeding this point both would start declining. theory Geothermal energy can be described as the stored thermal energy in, or heat produced from, the Earth’s interior. An accurate and simplistic characterization of geothermal energy is that of heat mining. The high temperatures of geofluids are enhanced by the friction associated with grinding of tectonic plates against each other, resulting in the fracturing of rocks and thus facilitating fluid flow at depth and hence transport thermal energy towards the Earth’s surface. GHC BULLETIN, AUGUST 2012 Figure 1. Forecast of World Population and Energy Production (from The Quaker Economist, Vol. 7, No. 155, March 2007). In any geothermal power generation project, whether it be a low-or-high enthalpy system, it is very important to understand the geology, structural and tectonic regime of the area, and subsurface characteristics based on surface geophysical methods, as well as geochemical characteristics of the geothermal waters and gases (Chandrasekharam & Bundschuh, 2008). The regions highlighted in Figure 2, illustrate subduction and strike-slip faults. A frequent occurrence of these areas includes constant tectonic readjustments resulting in regular earthquakes. Shown in the figure is a major subduction line which moves 18 mm per year and lies on the Eastern region of the Caribbean archipelago (Lesser Antilles) (Haraksingh & Koon Koon, 2011). Furthermore, other significant tectonic zones are oceanic transform fault, oceanic convergent boundary, and oceanic rift illustrated. Figure 2. Caribbean Plate Tectonics (Source: Google Earth). 23 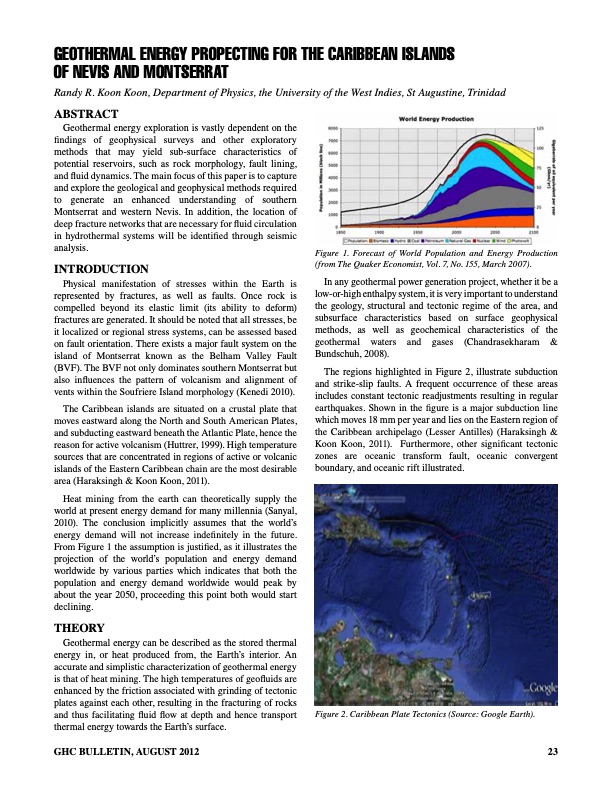 Geothermal Prospecting for Nevis and Montserrat